by MalcolmB
I'm playing with the idea of building a two-seater for road use, not decided on the layout or platform yet, but it would have a maximum unladen weight of 400 kg and three or four wheels, with a top speed of 70ish. I've not decided on a motor yet either, but want it to be light. I've found with my motorbike that it would be really useful to have a second gear just to widen the torque band. Can anyone suggest a suitable, readily available, 2/3-speed self-contained, compact, lightweight gearbox?

Dont know if these will be any good, 70mph might be a bit quick for them.

Check them out anyway.
http://www.tecumsehpower.com/frameset.p ... /index.php
by stuart mills
How about a Comet torque converter(CVT). One could be modded to control the ratio's by cable to a lever or to be fancy, a stepper motor controlling ratio relative to motor current.
A cheap alternative is to have 2 chain drives to a single back wheel and a pair of kart clutches connected to your output shaft so you can select one or tuther. You would need to ensure that you couldn't select both!
If you go 3 wheels I suggest you put 2 at the front if you going up to 70mph, remember the 3R's "Robins Roll Regularly".
Found a tyre for mine from Agri Tyres they do 4" wide 12" dia for low rolling resistance, they are E marked. I'm using a Perm132 now with a 4-1 ratio, should be somewere near. Not tried it yet though but I hope for 45mph. I may have to shed a few pounds though! Mind you the whole trike inc a 30ah 72v pack only weighs 152kgs. Regards Stuart
p.s no you cant see pics yet as it looks like an accident in an exhaust factory!
by MalcolmB
Thanks Dave, I'll take a look at those.

Both good ideas Stuart, I guess you've been through all this before. I like the manually controlled CVT idea, but don't they sap quite a bit of power? The dual kart clutches sound much more efficient. I bet I could make it look really Heath Robinson as well!
The Perm is a good motor. Steve (PHEV) uses one on his motorbike, geared at around 3.5:1 and running on 72V. He managed 80 mph recently and his bike only weighs about 20 kg less than your machine, so your exhaust factory should easily be good for 50 mph!
by qdos
There's a Comex box on the Zest and most of the other Quadricyles too which will do it though they are not the most efficient ways of transferring drive but they are readily available and work to over 70mph I've not had a ticket yet but if I do I'll send you proof

Good to hear you've got the tyre sorted Stuart I'm looking forward to hearing more about the trike. By the way would you like to write something about the R2 ? I'll put it in the next Plugged In if you send me something.
by timpootle
From http://www.morgan3w.de 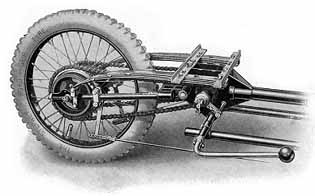 The picture shown here is from the 1923 maintenance manual and shows the Rear End of the 2-speeder. The drive is from a square joint in the clutch through the main frame tube to the bevel wheel on countershaft in the gearbox. A pair of Dog clutches can be worked with a side lever, putting into gear one of two chains. There is no reverse gear on the 2-speeder. In 1931/32 Morgan introduced a new R-type gearbox giving 3 speeds and reverse with only one chain.

There's nothing new ;-)
by stuart mills
Ian will do a piece for P.I as it was he who designed the electric system for his car.
I will give P.I a world exclusive on my trike when its done!
I cant type too well today though as I put a drill straight through my finger and then snapped it off! Its throbbing now but at least the panel I was making for the trike looks good (now I have washed the blood off it)
by MalcolmB
Sorry to hear you broke your drill bit Stuart. Hope it doesn't slow things down.
Hydrogen peroxide is very good for removing bloodstains.

Thanks for the Morgan link Tim. Really gives me a boost to hear I've almost caught up with 1930s technology...

Any way I hope your digit is OK

by hyve
Malcolm,
A couple of points about vehicle design:
1. weight has a direct affect on acceleration, but only minor on top speed;
2. top speed is the product of horsepower or kw versus frontal area and form drag - which means mostly aerodynamic resistance. Aerodynamic drag increases as the square of the speed. So if you can get 35mph from 6kw then you'll need 36kw to double the speed to 70mph. Rolling resistance increases far less and plays a relatively small part here.

If you use a motor big enough to give you 70mph for any length of time, will this not have enough torque to avoid the need for a low gear ? Without any experience of this form of propulsion I'd like to know where the tip-over point is for needing/not needing extra gears. Your motorcycle has a very small motor and a lowish top speed; the extra power you're talking about now sounds to me as though it ought to cope ?

A good source for the science which I've used for over 40 years is Colin Campbell's "The Sports Car: it's Design and Performance". Cars have moved on but the physics doesn't change.
All times are UTC
Page 1 of 3
Powered by phpBB® Forum Software © phpBB Limited
https://www.phpbb.com/